An orchard under an organic control program was studied for the incidence of pests during 2 years. Sex pheromone traps were used to control codling moths, <i>Laspeyresia pomonilla</i> (Linnaeus), by removing males. The only pesticides used in the orchard were petroleum oil at the delayed dormant period to suppress the overwintering eggs of the European red mite, <i>Panonychus ulmi</i> (Koch); and <i>Bacillus thuriengiensis</i> to control leafrollers, <i>Archips argyrospilus</i> (Walker), and <i>Archips rosanus</i> (Linnaeus). Leaf and fruit samples were taken for all the major pests which attack apples but the only pests which required treatment were the white apple leafhopper, <i>Typhlocyba pomaria</i> McAtee in 1977 and the codling moth in 1978. The failure to control codling moth may result in the curtailment of the organic program unless supplemental controls can be found. 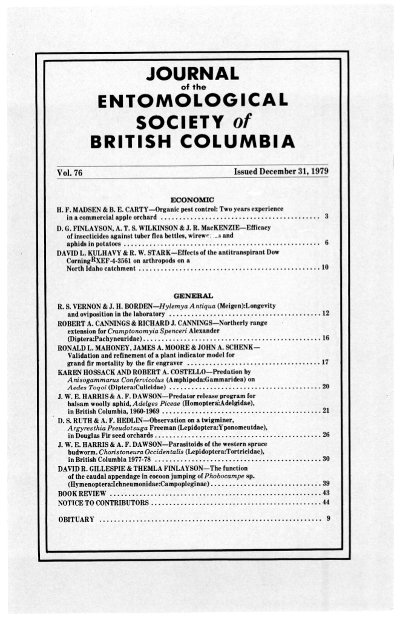 Vol. 76 (1979): Journal of the Entomological Society of British Columbia