A single spray of disulfoton and three of methamidophos (all at 1.12 kg ai/ha) suppressed populations of <i>Brachycolus asparagi</i> Mordvilko on immature asparagus for 90 days with light aphid damage. One application of oxydemeton-methyl (at 0.56 kg ai/ha) kept populations low as compared with the controls, but not low enough to prevent severe foliage damage. Two sprays of endosulfan (at 1.12 kg ai/ha) and three of malathion (at 2.24 kg ai/ha) during 90 days did not prevent moderate to heavy damage. The results indicated that the spray threshold of 0.5 <i>B. asparagi</i>/g of asparagus sprig used in this study was too high. No sprays controlled the other aphids present, which were mostly <i>Myzus persicae</i> (Sulzer). Granular formulations of disulfoton (at 0.5, 1.0, 2.0 and 4.0 kg ai/ha), carbofuran (at 2.0 kg ai/ha), and aldicarb (at 2.0 and 4.0 kg ai/ha) applied as side dressings alongside young asparagus, all gave excellent control for almost four months. CGA 73102 (at 1.0 and 2.0 kg ai/ha) and carbofuran (at 1.0 kg ai/ha) gave significant control for three months. Spray and granular treatments giving the best control also produced the thickest spears the following year.

Szeto, S.Y., R.S. Vernon, and M.J. Brown. (In press.) The degradation of disulfoton in soil and its translocation into asparagus. J. Agric. Food Chem. 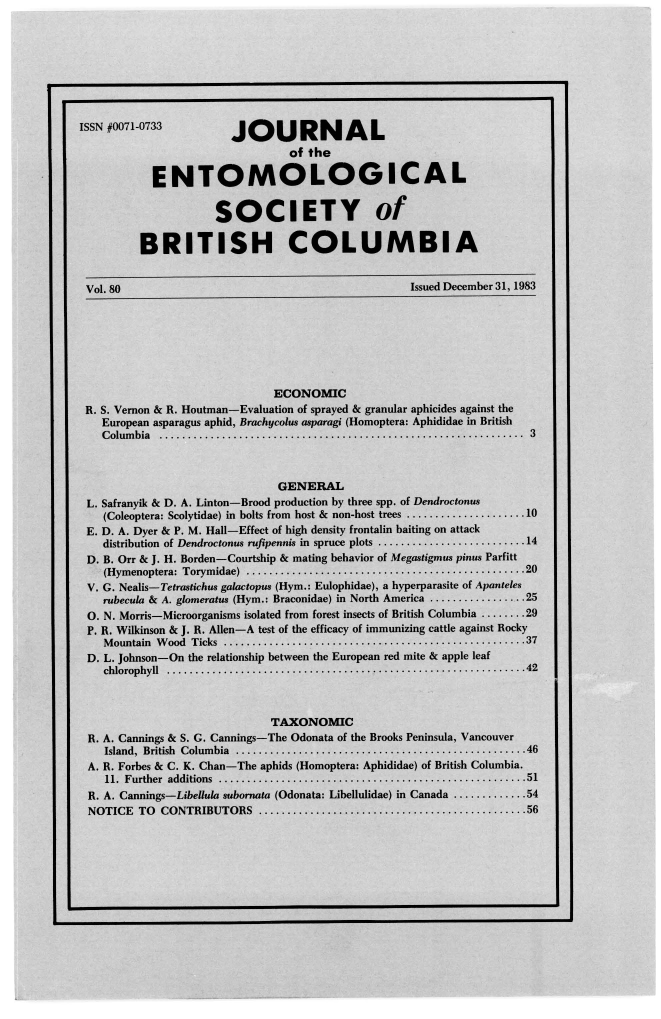 Vol. 80 (1983): Journal of the Entomological Society of British Columbia